The Feast of Dedication 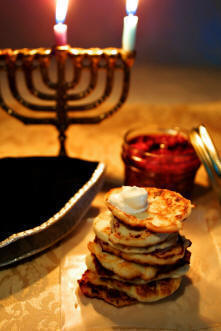 John's Gospel contains a Hanukkah story built around a controversial miraculous healing. The controversial miracle involved a man, named Yeshua (Jesus), who had apparently healed a man born blind. Some saw this as a miracle, and praised God, while others accused Jesus of doing miracles through demonic power.

The Gospel of John has this account of the story: "But others said, "These are not the sayings of a man possessed by a demon. Can a demon open the eyes of the blind?" Then came the Feast of Dedication at Jerusalem. It was winter, and Jesus was in the temple area walking in Solomon's Colonnade. The Jews gathered around him, saying, "How long will you keep us in suspense? If you are the Messiah, tell us plainly." (John 10:21ff)

Yes, Yeshua (Jesus), who we believe is the Messiah foretold by the prophets, celebrated Hanukkah. Unfortunately this Hanukkah was not the happiest of occasions as there was much controversy amongst the religious leaders about the character of this strange rabbi from Galilee whose provocative and authoritative, style had enraptured some and angered others. Not only did Jesus speak like a great prophet, He also performed miraculous acts of healing that were nothing short of Messianic. Jesus had found a strong following with the Jewish people, but the religious leaders were threatened by His claims of divine authority and His accusations against them that they did not practice what they preached.

John's Gospel places one of Jesus' greatest miracles, and the controversy that followed it, at the doorstep of the winter celebration of Hanukkah. This special miracle was the healing of a man who was blind from birth. Upon questioning from religious leaders of how this strange teacher could perform such a feat the formerly blind man is quoted by John as saying..."One thing I do know, I was blind but now I see." (John 9:25)

Should Christians and Jewish believers in Messiah celebrate Hanukkah? Well, if you believe Jesus is the Messiah, and He celebrated Hanukkah, then why wouldn't you?

Whether you are Jewish or Gentile, if you are living in darkness we invite you to seek spiritual healing on the Festival of Lights from Jesus, the Messiah.

Our prayer for all Israel during this Hanukkah season is the prayer of Micah...

"But as for me, I will watch expectantly for the LORD; I will wait for the God of my salvation. My God will hear me. Do not rejoice over me, O my enemy. Though I fall I will rise; Though I dwell in darkness, the LORD is a light for me. I will bear the indignation of the LORD because I have sinned against Him, Until He pleads my case and executes justice for me. He will bring me out to the light, and I will see His righteousness." (Micah 7:7-10).

Learn More about Judaism's understanding of Hanukkah at Chabad.org

Are you afraid your latkes just won't cut it? Find a diner with a "to-die-for" menu and treat a friend.

We highly recommend the famous Ben & Irvs Restaurant & Deli in the Philly suburbs - and yes, they have take-out! Check out their website at www.BenndIrvs.com.